Getting better base fill out

Staff member
When I get a used mold or a new mold that doesn't want to offer good bullet base fill out, it is a common practice for me to " break the top edge of the blocks " . I use this technique on Steel, Brass, and Aluminum moulds. 1 cavity, 2 cavity, 4 cavity, and 6 cavity.

This 1st photo will show the correct angle to hold the file. Be certain that the file doesn't enter the mould cavity. It may work out best for you to put the mould in a padded vise so that it cannot move. Then you can focus your efforts on the angle of the file and making short smooth strokes with the file. 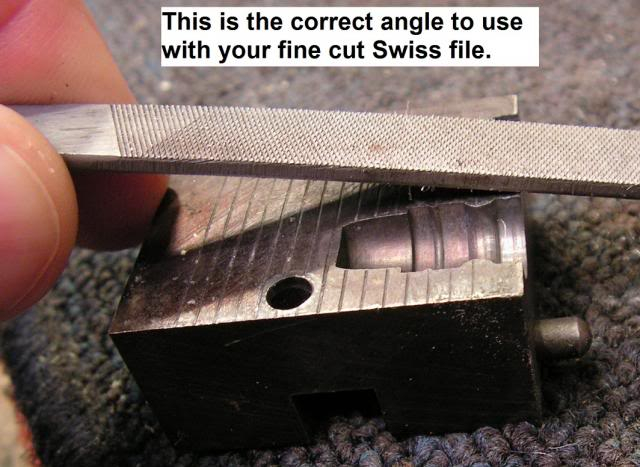 I use a very fine cut flat Swiss file. ( The file I used in the photo above is too coarse, I have a very fine cut file, I just didn't have it handy for the photo session ) Some use a fine cut flat stone to accomplish this. It is important not to remove too much metal as you'll end up with " fins " on the base of your bullets. The amount of metal that you'll remove should offer you about the same gap as a vent line on the top surface of your mold blocks. 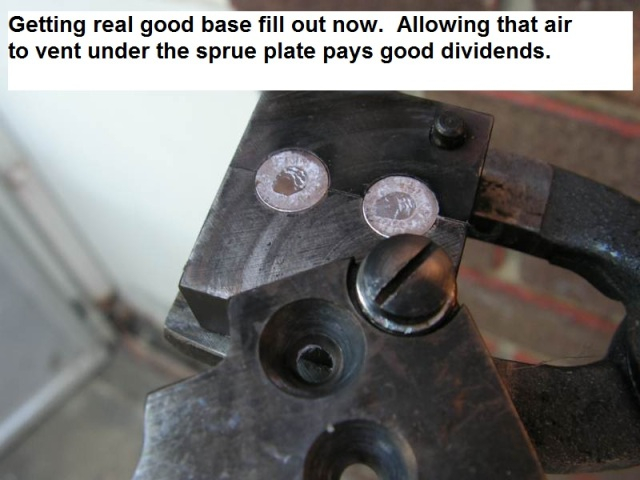 It is best to go a little at a time and stop and make about 40 bullets to see if the metal you've removed has made a difference in your problem. Remember , once metal is removed - it can't be put back on ! Only remove enough metal to offer good bullet base fill out and then STOP ! 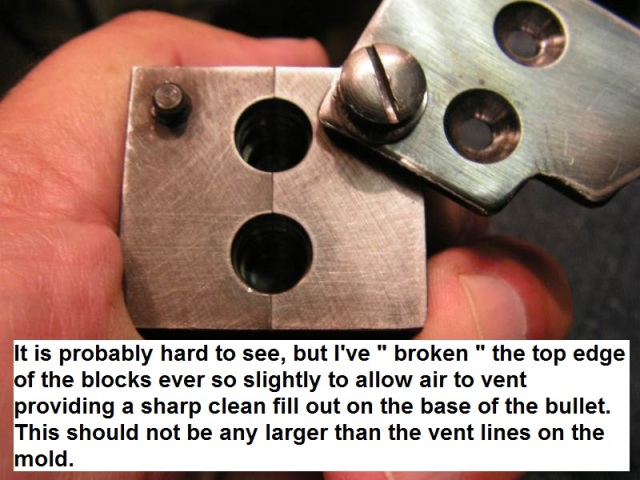 Look closely at the tops of the blocks.
You can see the " shiney " areas where I've removed a tiny bit of metal on both halves of the mould . 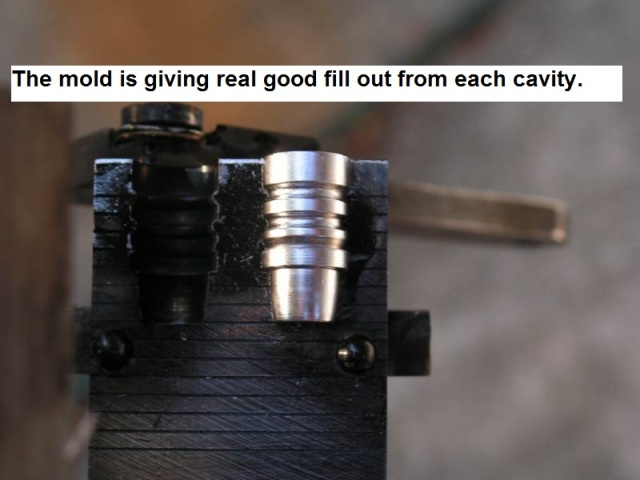 This technique that I'm describing makes a BIG DIFFERENCE in base fill out on any brand of mold, steel, brass, aluminum, etc !

The mold that you see in the photos below didn't want to offer bullets with decent base fill out regardless of the mold temp, alloy temp, etc. After the vent lines were added at the very top edge of the blocks ( see the last photo ) , the mold base fill out was near 99%.

Be certain that the sprue plate is not too tight. It should swing from right to left with very little effort. This will aid in the venting of air as the mold cavities fill.

I once had an inexpensive Lee , 148 Gr. 38/357 Wadcutter Mould.
The bases did not want to fill out very well.
Notice the shiny top edge of the mould in the next photo. This was done to both mould halves. That shiny top edge was created with a fine cut Swiss
file held at the correct angle. Now look at the difference in base fill out after the venting process
is completed : 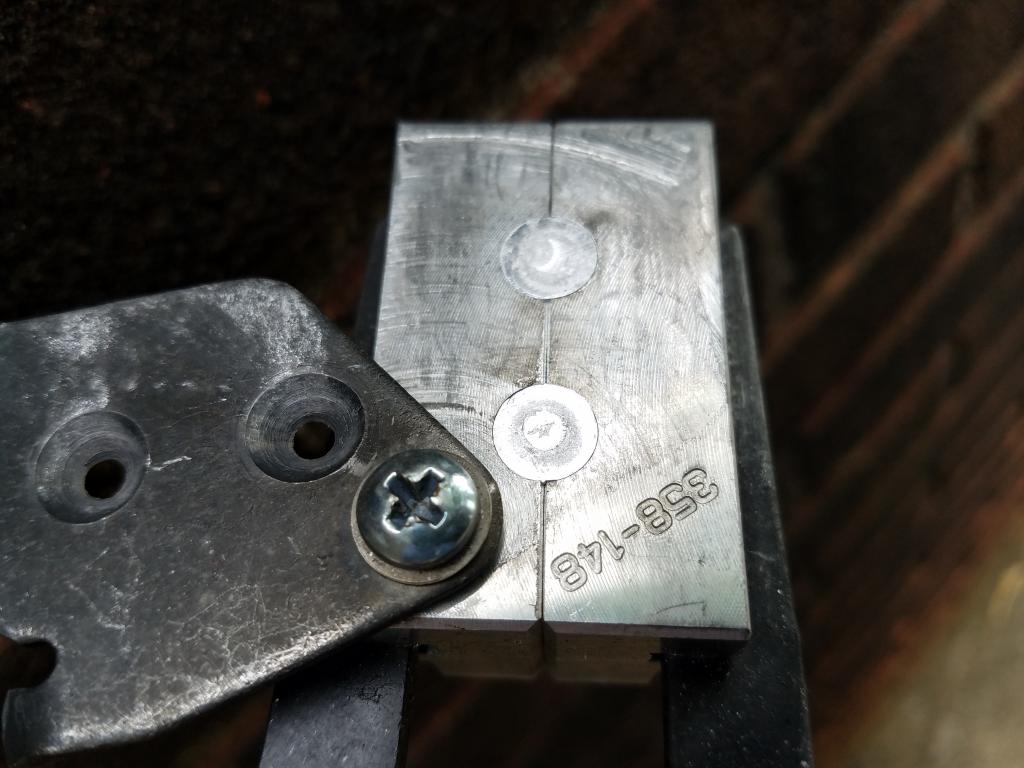 Here is an older Lee 6 cavity , plain base , .30 cal. mould.
Regardless of how clean the mould was, how hot the alloy temp was, it wanted to give about 40% of the as cast bullets with slightly rounded bases. Thanks for sharing Ben. One thing I do differently is to file across the top instead of the way you show, maybe I should try your way.

Staff member
Hey, if it works well for you, I wouldn't change a thing.

Thanks Ben. I hadn't thought of that but did it to my 358477 mould yesterday. Haven't got to try it yet but maybe today.

Staff member
You are VERY welcome !
Let us know how it works for you.

Ben, I wasn't sure I had beveled enough but I ran 50 with a one hole mould with no culls and said "time to quit before I get too much of a good thing".

Rex said:
"time to quit before I get too much of a good thing".
Click to expand...

Subtleties play big in all of my dealings with mated metal tooling like mould blocks. Less is more, for certain. On my moulds that required this step (about a dozen of them, all Lymans) one delicate & light pass with the fine-grit side of an emery board stolen from SWMBO did the job.
P

I generally have trouble with rifle moulds and break the top of all the Al. moulds. Tom (and Lee?) started putting vent lines in the top but I still break them. I don't use tin in alloy. I get good bases when I fill the cavity quickly. Watching the pour carefully to make sure I get good flow and centered in the sprue hole. Off center or a dribble and bad base. Don't pour a particularly large sprue puddle and let the mould drop on bench immediately. Impulse kinda helps base fill out. Modified the Lee so it opens and closes quickly.

I have a problematic 5 cavity mould for the XCB bullet that requires 3 different pouring techniques for the 5 holes. I'm just too chicken to take a file to it so far, but I'll bet it would help. If it were an easily replaceable Lee 6 banger I would have done it already.

Ben, thank you for posting this. It came in handy this weekend.

It seems that new Lee molds always need to be deburred. When I get a new Lee mold the first thing I do now is scub it with Bartenders Friend and a toothbrush; this also helps remove residual machining coolant. I then scrape the edges of the cavities with my fingernail bending back and forth any offending burrs.

On Saturday I broke in a new Lee six banger 312-155-2r. The burr at the top of the blocks was impressive. I remembered reading this thread. So I took a big 8” long stone to it, removed the burr and barely relieved the edge.

All in all it work out well, with good base fill out. Cavities are a bit off center, bullets are all hanging up on one side, but pop out after four or five smacks on the handle hinge bolt.

I've been known to take an Exacto knife to the burrs you describe , gently remove offenders. Sounds like you may still have some, causing sticking. You can find them rubbing a q tip along the edge.

I deburr my Lee moulds with a viciously sharp wooden toothpick. If I scrape the vent lines towards the cavities, and top of the bloc, they usually break off after a few passes.

You guys may be right. The left hand mold block is gonna get another hard sideways scrub and inspection before I cast with it again. I’ll try the q-tip, and hard wood pick trick.

@L Ross, NOE's aluminum is finicky. If the mould is fairly new it may take half a dozen heat/cool cycles to build enough oxide for it to cooperate. You can also loosen the sprue plate slightly to allow a bit more venting of the base. All aluminum moulds will have the vent lines plugged with flash on the side of the cavity the cutter exits as it turns RH from the top, so pushing that flash back into the cavity and breaking it off as Josh, Spindrift, and SMac described, then polishing the cavities with fine steel wool (or just lapping them) with the blocks closed will open the vent lines back up and aid venting considerably.

Yay! Thanks to all of you guys. Ian that makes sense about the cutter rotation. I do believe it's time to get the Opti-Visor out!

Yes, opti-visor or a machinist's 20x pocket microscope are excellent tools for seeing what needs fixing without scrubbing off the nice sharp edge of the cavity.

One reason iron moulds cast so nicely and don't have this problem of vent lines getting plugged is that machining cast iron creates dust instead of chips, so no flashing forms on the trailing edge of a cut...... the material just crumbles away at the edge.

Ian said:
@L Ross, NOE's aluminum is finicky. If the mould is fairly new it may take half a dozen heat/cool cycles to build enough oxide for it to cooperate. You can also loosen the sprue plate slightly to allow a bit more venting of the base. All aluminum moulds will have the vent lines plugged with flash on the side of the cavity the cutter exits as it turns RH from the top, so pushing that flash back into the cavity and breaking it off as Josh, Spindrift, and SMac described, then polishing the cavities with fine steel wool (or just lapping them) with the blocks closed will open the vent lines back up and aid venting considerably.
Click to expand...

Regarding the heat cool cycles. Can these be done just by heating on the hot plate and cooling or are actual casting session better? I just found a brand new NOE Saeco 315 clone, double cavity, one plain base and one gascheck mould that must have come from a group buy years ago. I could hide my own durned Easter basket. But that should make a good test subject for deburring and heat cycling.

Been awhile, but seems like NOE recommended heat cycling in a oven before casting. I think I did that with one, others I just started casting. Building a patina is the purpose.

California's Central Coast Amid The Insanity