About 1,700 fps seems ( for me ) to be about the ideal velocity.
Real good accuracy combined with good killing performance with the bullet upon impact. I want good accuracy with reliable penetration with a nice exit hole. 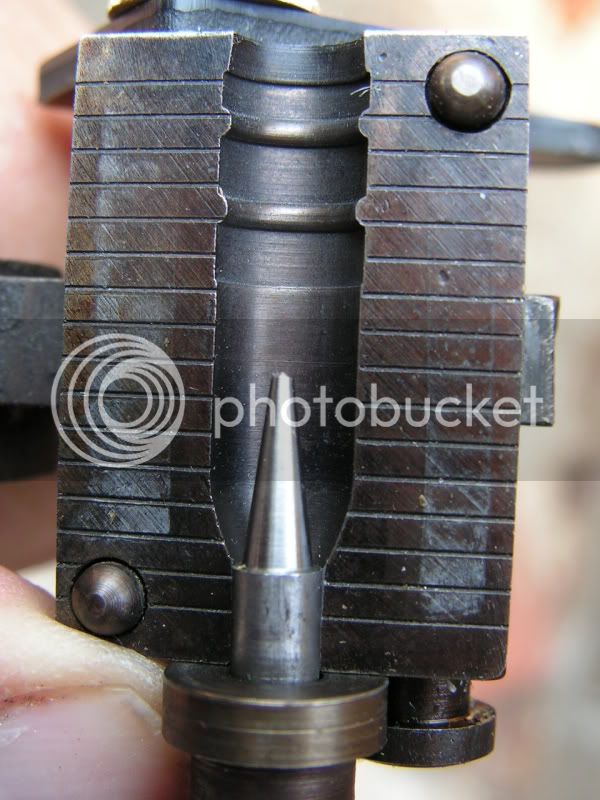 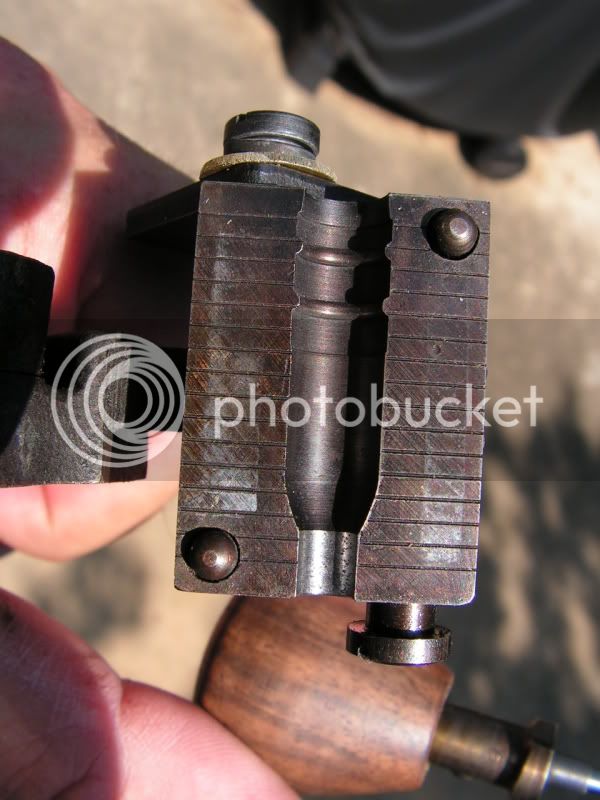 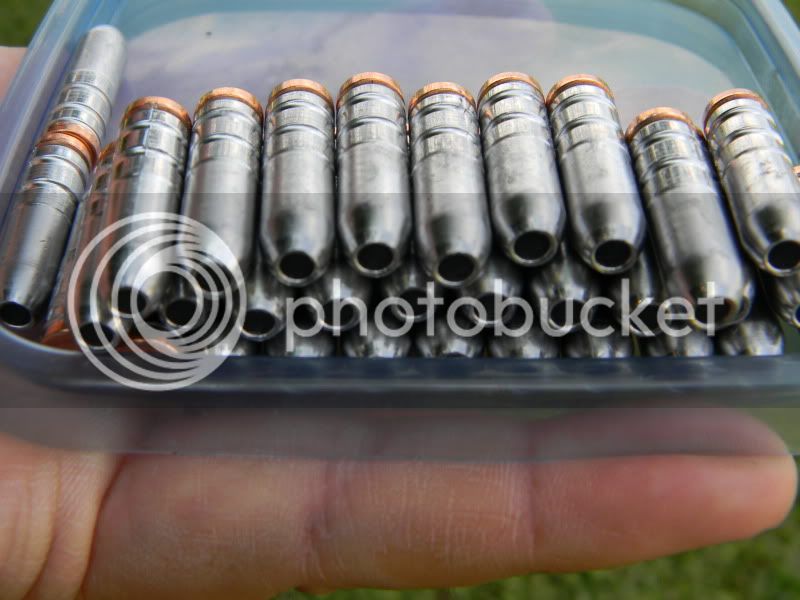 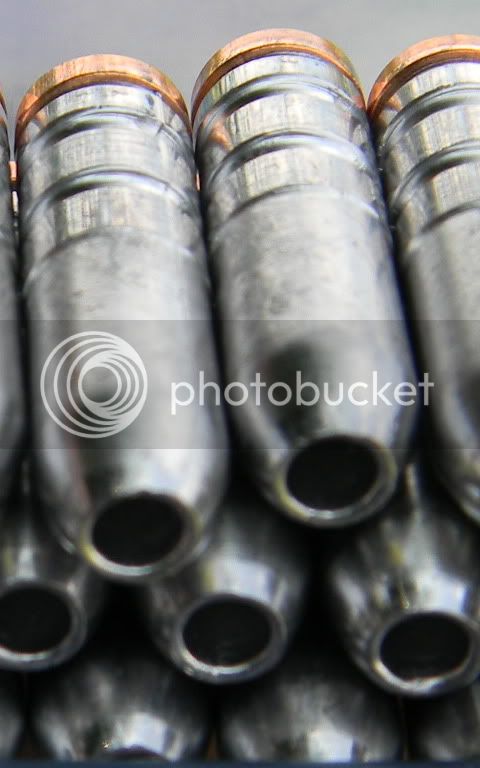 ​
​
I have about 7 or 8 different HP pins for my mould.​
The pin on the bottom below is far too long.​
I've had better killing performance with the bullet with the top 2.​
​ 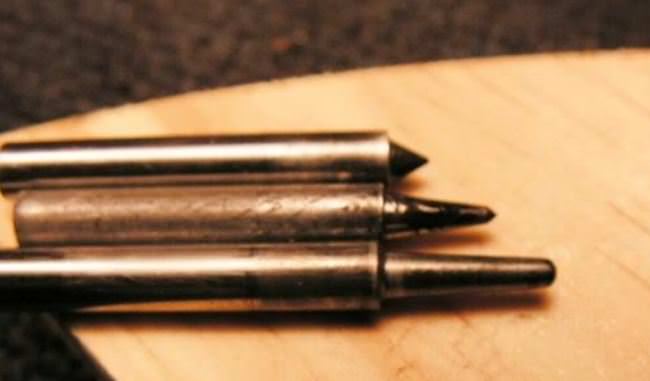 Staff member
Here the bullet is on target ( 80 yards off of a sand bag rest ) AFTER the hp work was completed : 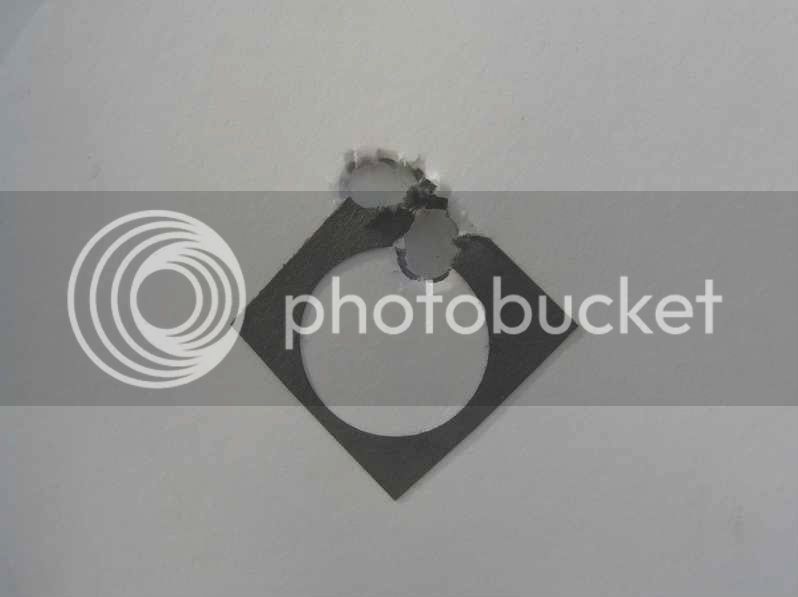 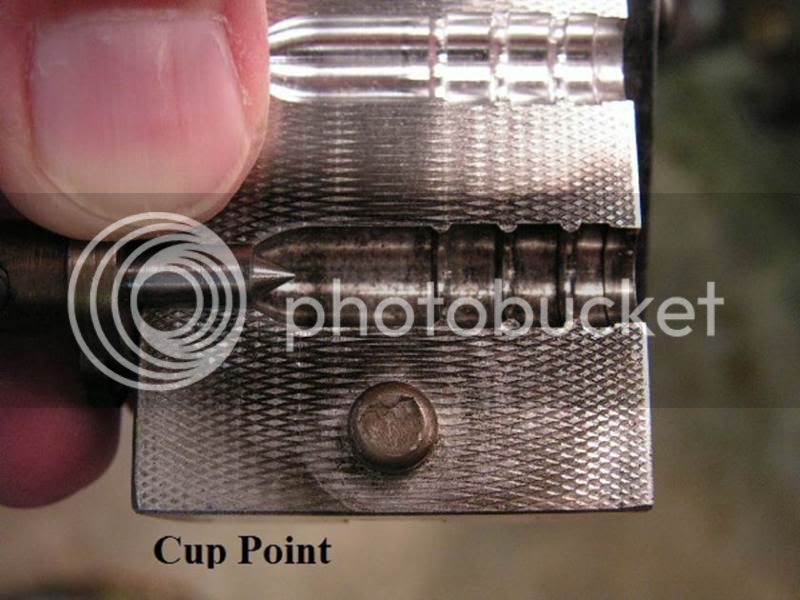 Staff member
I also have a 31141 HP mould that Buckshot did for me. 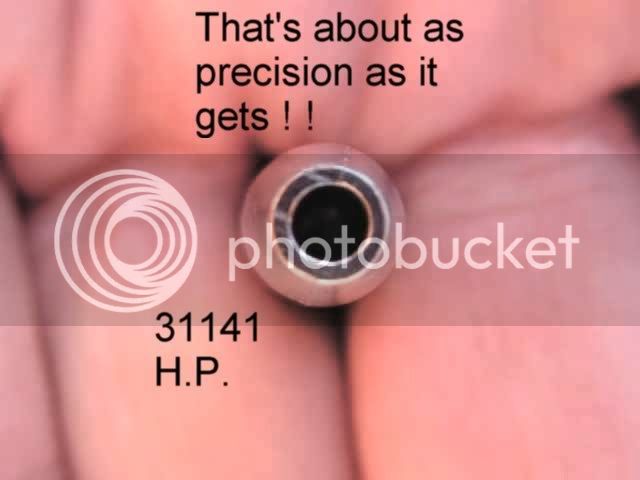 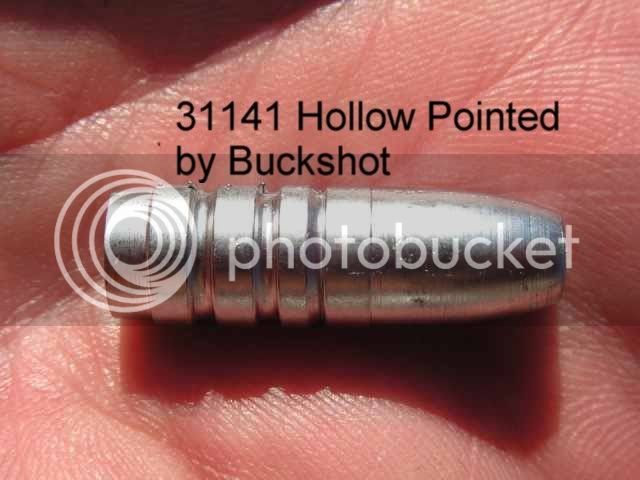 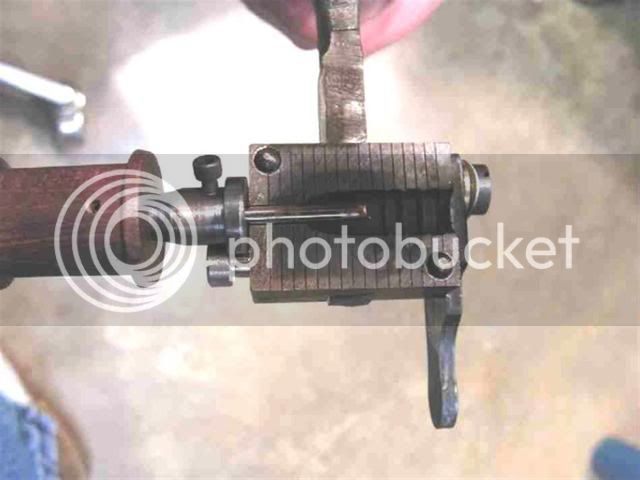 Notice the depth of the HP pin in the photo above. Too long as you will see.

Here is the bullet : 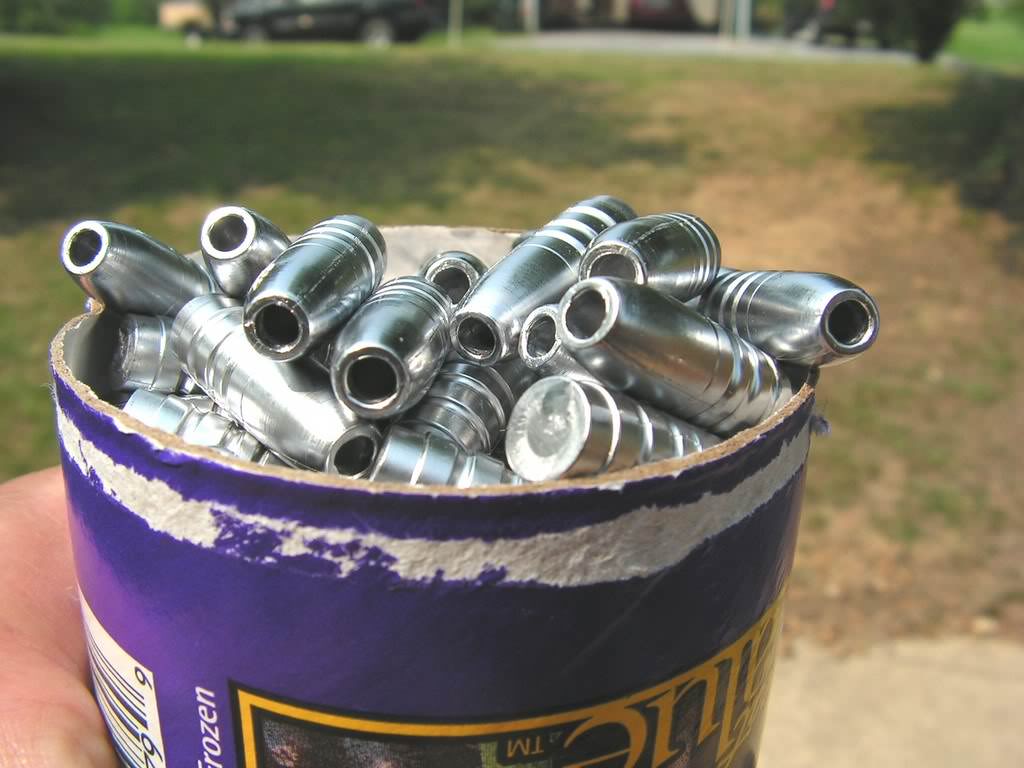 Large doe shot at about 70 yards , bullet was FAR TOO EXPLOSIVE ! !

The bullet exploded upon impact. Look at the shrapnel : 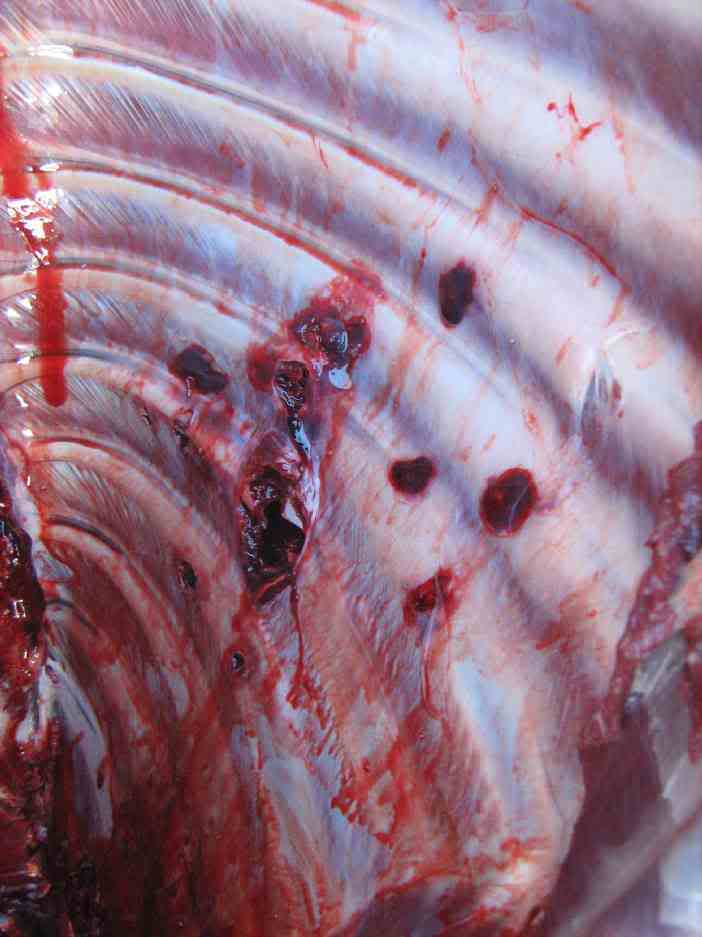 This is what happens when the HP pin is too long : 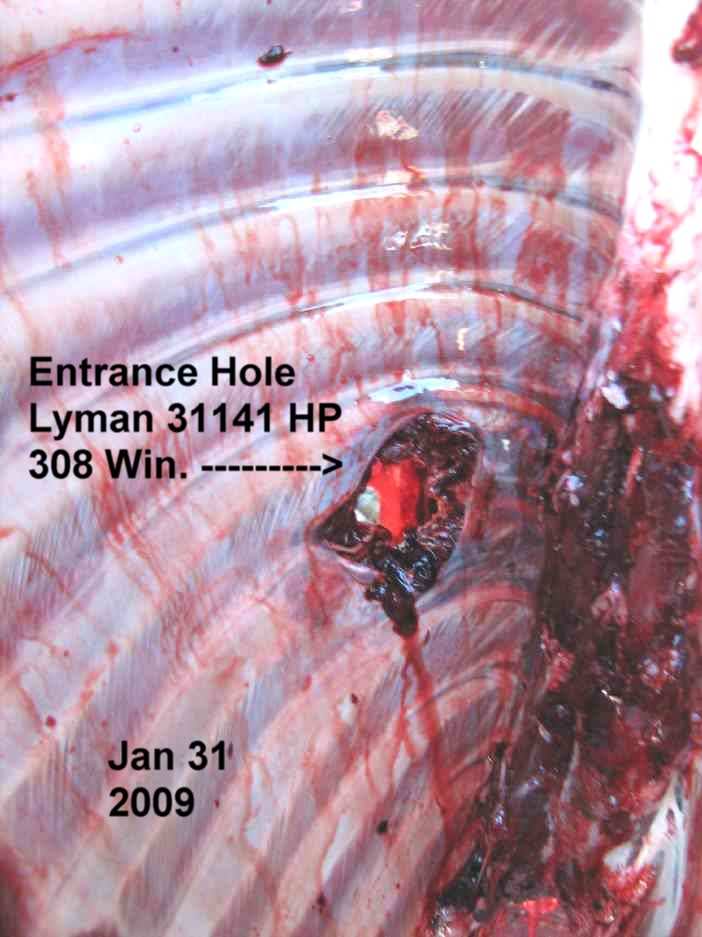 Wow Ben, thanks for the reply. I had seen some of these photos but not all of them. I understand your heavy for caliber thoughts and agree, but my lever guns I don't think will chamber a long nose. My 311291 throws a .3015 nose and won't chamber unless very deep seated. I have a 311299 that has a 298 nose, so I will make up some dummy rounds and see how they chamber. I also have an Accurate 31-200M I bought for the ought six so I will try that one as well. It measures 303 in front of the driving band but has a FAST taper to the nose.
Do you think the Saeco 315 clone will chamber in short throat 30-30's? The NOE quotes 179 grain I think and I was thinking of using the cup point and 16:1 alloy or do you think a standard bore rider design would be better. I was planning on getting a four cavity because I have four 30-30's and lots of grandkids that love those lever guns and could use the flat point in COWW alloy for their plinking.
Sorry for being so long winded, and again thank you for the detailed reply.
Tony

Staff member
The cup point would work just fine for you.
Day in and day out, the # 315 is one of the most accurate .30 cal. cast bullets that I shoot. 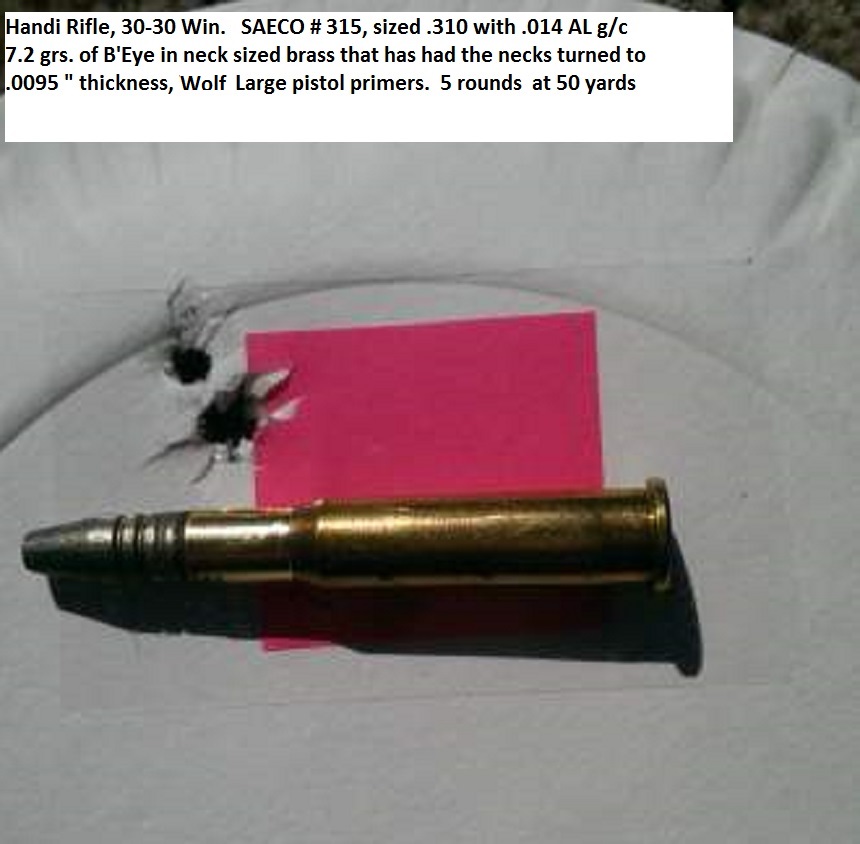 IMO the 315 will work great in the savage. [so will the lyman 311446 Loverign design]
the lever guns will want something a bit more mundane.
the rcbs 30-150 or180 or the LEE's in the same weights are perennial favorites.
unless you got a Marlin then the ranch dog molds usually are a better choice as well as 311 sizing.
A

Thanks fiver, one marlin and two winchester. The marlin on lyman 311041 have to crimp at top of front driving band. The winchester's have to crimp at the bottom of front band. The savage crimps on the lower half of the crimp groove. That's why I like the 315 from noe. It comes with deep/cup and flat point pins. One mold cover all needs with two alloys.
But!!! taking Ben's advise and going heavier has some merit also. I'm thinking using some of my 200 grainers with nose's from .298 up to 303 and filing the nose's flat for a hunting bullet might be a possibility. You and Ben are not the only time I've heard how accurate the 315 is. I am very leary of the big 3 steel mold makers in regards to as-cast sizes. NOE and Accurate have been spot on on every mould I've bought. I'll try the 200's and see how they chamber this weekend.
Just as an FYI, I have the Lee 150 flat and it throws a .299 nose but the bands won't make .310. From 1200 to 1500 it does fine but over 1500 the 041 lyman does better. Plus both of those moulds are 2 cavity.
Thanks for the replies.
Tony

abj said:
I am very leary of the big 3 steel mold makers in regards to as-cast sizes.
Click to expand...

You've got a right to be leary.

Ben, for some reason it seems I remember that you HP'ed your 315. If so did you ever hunt with it?

This is a 1980's mold, no idea what Redding is putting out these days.
A

Rick, That is why I love Tom/Accurate. Give him your alloy and tell him what you want and it's a done deal. I have a Magma master caster and can run no more than 500/hr with a two cavity and keep the quality up. With a six cavity Accurate I can get 600/650 an hour and the same quality. As far as purchase price, Tom can make a steel mould for the MC for about $110. plus the hardware from Magma, your looking at the $130/140 range. Or a 5 or 6 cavity hand mold form Tom at about the same price. When I got the Lyman Mag 25 bottom pour, using a hand mold is not a big deal now. I am not a fan of ladle pouring.
I like NOE also, but no choice on custom as cast sizes, so if his design works then great. His pistol moulds work out great for me but the rifle designs, as we all know are a lot more precise to each gun.
Tony

yeah the old wheel of what diameter are we getting today is starting with LEE too.
they used to be pretty good with their designs and diameters.
it was their mold quality that was in question.
now that they have helped themselves out with the mold design their diameters are getting spotty.
I was just talking to Ian about the 230gr 5R mold, he is powder coating his bullets.
I can barely chamber mine after a trip through a 310 size die, and I can forget using lake city brass unless I want to turn the necks.

abj said:
Ben, for some reason it seems I remember that you HP'ed your 315. If so did you ever hunt with it?
Click to expand...

Yes, my friend killed an 8 pt with the bullet at 80 yards.
The HP pin was far too long. Here is a photo of the # 315 and the " Long " hp pin. Buckshot did the work on this one. In his defense, he made the HP pin the length that I requested. This was back when I thought " more is better ".
Actual field testing on white tail deer proved to me that this concept of long deep HP pins is a recipe for a ruined hunt. 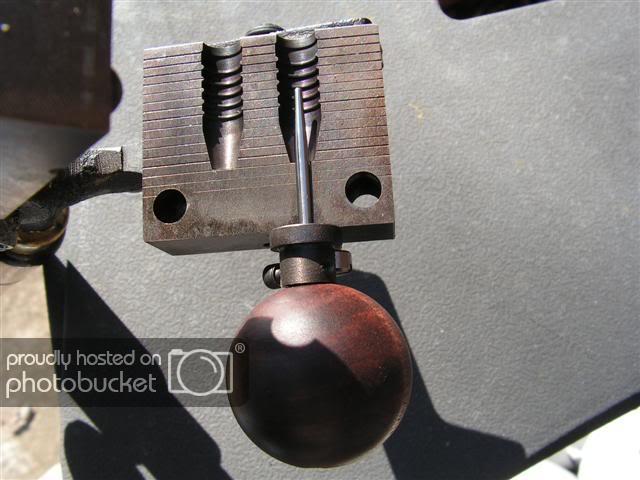 After nearly loosing 2 deer because of bullet blow up, I shoterned the pin.
This is a poor illustration of the HP pin length now. Works much better now and I always get a good exit hole on deer. 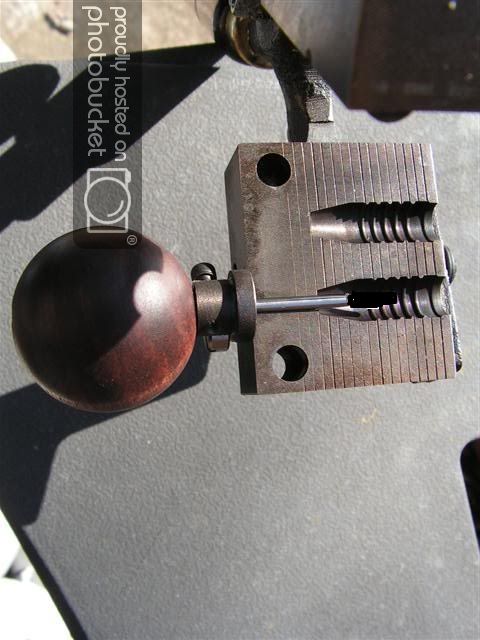 When my friend shot his 8 point , the bullet exploded inside the deer ( no exit hole ) , 1/2 mile later with a lot of good tracking skills, he found the deer. At this point in time, I knew then that the HP pin was far too long , making the bullet basically a " flying bomb ".

I shortened the pin and the bullet has worked much better.
The nose dia. ( meplat ) of the # 315 is fairly small anyway.
If the HP pin is large in dia. and fairly deep ( more than 20% the length of the bullet ) , you've got a good recipe for a bullet blow up.

My HP pin length is now about optimum, in my opinion.
Everything works better with the bullet now.

Ben, Thanks for the info, I am leaning towards the 315 unless my 200's surprise me.
Fiver, That is exactly why Tom's business is growing so fast, he has made the customer's alloy a main design aspect before he cuts the mould. I have almost finished tweaking my all purpose alloy at 1.5 tin and 3.7 antimony for rifle and pistol and 20:1 for hollowpoint pistol. One of the 3 pin 358 moulds from NOE in 38 special cases uses the deep pin for 800 to about 860 and the cup point from 860+ up to about 925 or so are perfect mushrooms and hold together. Now I want to try the cup point on a 30 cal in the 1600/1800 range and see what alloy it takes to hold together and maintain accuracy to 100 yds. The 50/50 plus 2 air cooled has not worked out for me. According to the alloy calc. its roughly 1.5/1.5 give or take. I thinking going to around 2/2 might work. I have tried 2.5/2.5 and it is to hard.
Tony
You must log in or register to reply here.
Share:
Facebook Twitter Reddit Pinterest Tumblr WhatsApp Email Link