Staff member
HP is a mixed blessing. I kinda shy away after a bad experience. Too hard, too fast, too large an HP. Almost lost the buck. Luckily the neighbor spotted the deer and finished it. I was embarrassed. Alloy was a bit harder than WW driven over 1600 fps. I was about 100 yards away and uphill. Deer was quartering towards me and shot hit shoulder blade. Deer went down at shot but got up and ran. I found the bullet in the neck.

Did you know NOE made a mould with a single HP cav in the 3 cav mould?

A shot like that is where you want a WFN to bite into the edge of the bone and punch straight on through with full mass retention rather than blow up the HP and lose so much energy that it deflects without penetrating vitals.

Staff member
Yep. Same bullet but with no HP and the deer never gets up. Sold me on penetration over expansion.

An HP works well on ideal broadside shots. Not so good on raking angles or where large bones may be hit. I decided to stop letting deer and bullets dictate when I could shoot.

You've hunted bear, too Brad (not me, but plenty of tough, mean, wild pigs) and you know big bones can be a problem. So can wounded, po'd game. I think those experiences might have fine-tuned our attitudes about erring on the side of penetration.

Staff member
My two bears each got a 420 gr heat treated range scrap bullet at 1650 from my 45-70 Marlin. Both got complete penetration and much damage. A reasonably ductile alloy heat treated to hand the velocity and not lead. Plenty of weight and length for penetration. Enough velocity to ensure the impact was noticed.
I would consider both kills to have been indications of an ideal load.

I just bought my first HP mold , an Ideal 358439 found on ebay last week and have not had time to cast anything with it. I have always used non Hp Keith designed SWC's for hunting but decided to try some of his HP designs as well . Also bought a 358156 that is missing the pin and will be sending it off after Christmas for a replacement pin . May need to ask you guys some questions when I start casting.

Imo hollow points are not for shooting shoulders unless large caliber & close range. I would have taken a spine shot in Brad's example, then ran up for a quick vital or head finisher if necessary.

I have never not been able to kill a deer I wanted to, due to using hollow points.

One cast h.p. kill to report. 308291 Ideal HP, Hornady gas check, 26 grains H-335, Winchester Model 94 26" barrel. Adult doe, broadside 42 paces away. Shot just above heart, obvious expansion immediately after clipping a rib, plumbing ripped up over heart, both lungs tore up, it looks as though the nose disintegrated with several small pieces having broken off. The rear of the bullet exited like a wadcutter with a few small holes around it. Doe made a mad dash for 4 or 5 bounds and collapsed.
Because I tinker way too much and often choose a different rifle each year I have not revisited that combo.
Solid cast bullet kills with 45-90 500 gr RN, 40-70 400 gr RN, 8x58 Rem/Danish .329" Karabiner mould ACWW+2% 1,400 fps, 35 Whelen 200 gr RCBS soft bullet 1,800 fps, three deer with 429215 ACWW 1,600 fps 20" carbine (that's a solid deer killer), 311284 ACWW+2% 1,900 fps, (very adequate I highly recommend that combo), RCBS 30-150-FN 1,600 fps, little or no expansion, perfect placement quartering on shot, broke leg, cut rib, lung, heart, lung, thru diaphragm, thru liver exit flank with 35 caliber hole.
Hope to use 33 wcf this Fall with Accurate 200 gr bullet mould that really resembles the RCBS 200 in 35, I really don't expect anything other than a hole thru a deer and more venison.
I can also say that big heavy soft lead tin bullets kill buffalo very nicely often with complete penetration. I've killed 3, my wife 1, and I have assisted in the disassembly of 19 more shot with similar loads.
Duke

I never hunt big game with a cast hollow point......... I much prefer modifying my alloy for bullet expansion.. But this, can also be a slippery slope!

Conversely, I ALWAYS hunt varmint and predators with big HP's! Only for wanting the pelt will I not use HP's. Here.... all the bad results above is what I look for and even more! I have .25-20 varmint loads that has impacts that are a sight to behold. What's left of the smaller stuff never moves after impact. I've never failed to open a jacketed bullet varmint hunter's eyes wide open when they see one of my cast BIG HP's hit!

Eutectic, I really like your idea of HP's for pest control. Is this big HP bullet for the 25-20 a commercially available mold, or just another frustrating Will-'O-Whisp that was once upon a time available but now unobtainium?

I was teasing Ian on another thread about finally getting a lathe!

So to answer your question.... I have a little (but accurate) 3" lathe in my reloading room which is pretty much dedicated to hollow pointing! I have not cast a hollow point for a lot of years because I can drill them almost as fast and change cavity size, depth, style, weight all into one block of test loads. So I'm a little spoiled with my hollow points!

Eutectic beat me to it, but my vermin getter is a NOE .360-180 WFN PB that I sent off to Eric and had it modified with a massive set of pins, it drops at 165grs. In my 92 clone w/24" barrel I chronied them at 1750fps average, and for smallish critters, coons, skunks and such they're absolutely devastating under fifty yds.

From the explosiveness demonstrated to date, that's about all mine are good for, except perhaps for home defense where over penetration could be a concern.
G

Hope it's OK to add to this old thread.

Her first deer with this set up was a little over 100 yds. away. It was close to dark when she shot it, and was dark by the time I gutted it. The bullet didn't exit, rather the offside skin stopped it. It tore the thin layer of muscle and left a dime size impression in the offside skin, indicating expansion to me. I couldn't find the bullet in the dark and by the next day the coyotes had scattered the gut pile.

Between she and I we killed at least a half dozen deer with that load and rifle, but never recovered a bullet, and at times I questioned if it was expanding. The last one I killed was behind the house almost a dozen years ago. Again no recovered bullet, but it appeared to have done plenty of damage, so maybe it expanded. 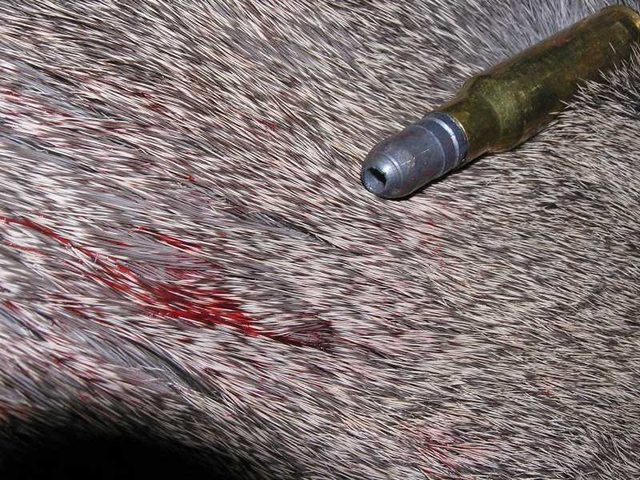 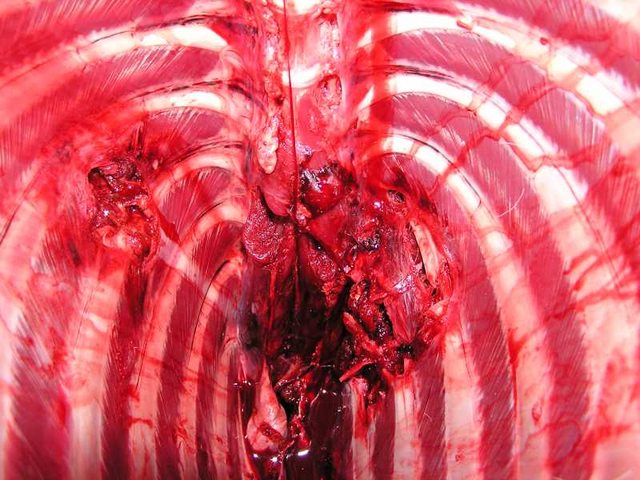 The exit hole in the body cavity- 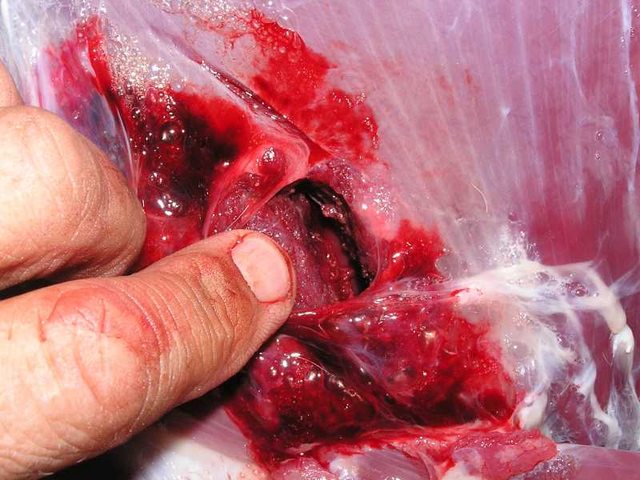 The exit hole in the skin- 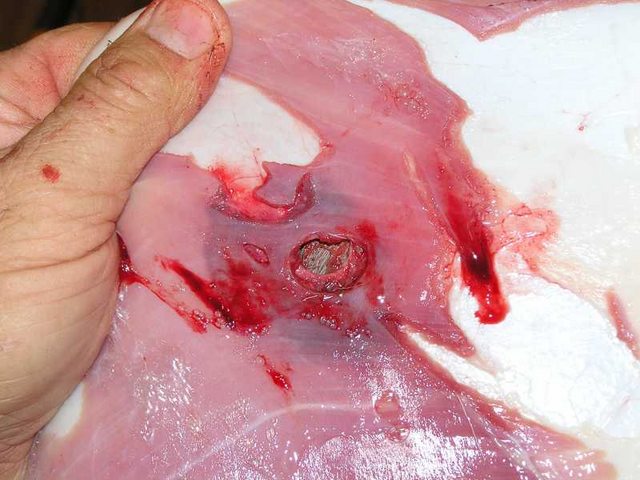 Keep them coming GGibbs, I like seeing the pictures and results. Picture is worth a thousand words.