My experiments with PC pistol and rifle bullets

These are freshly casted 45 cal pistol bullets prior to sorting: 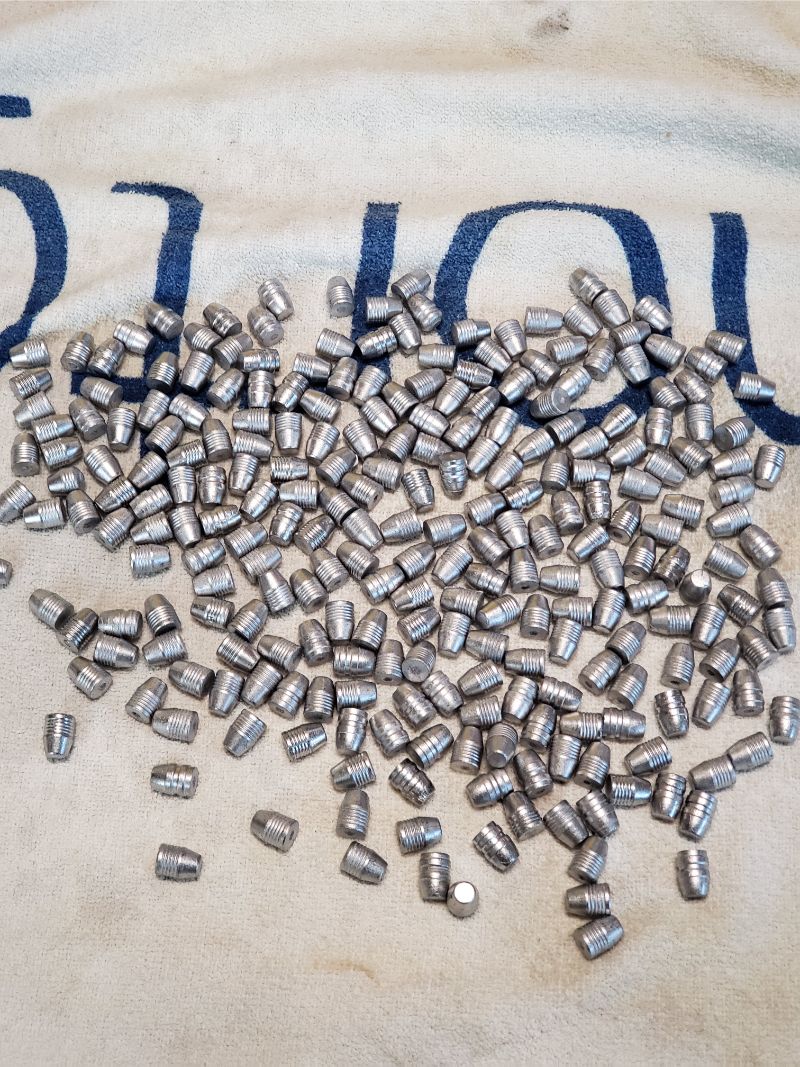 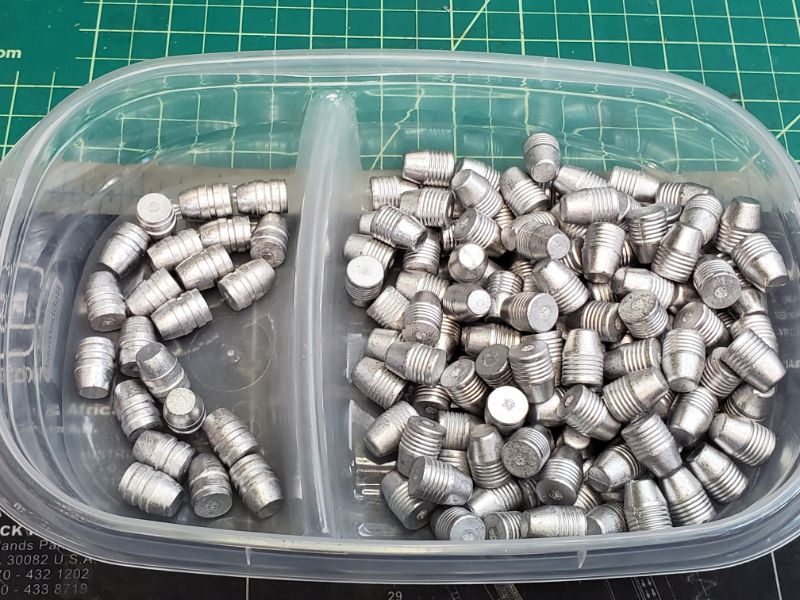 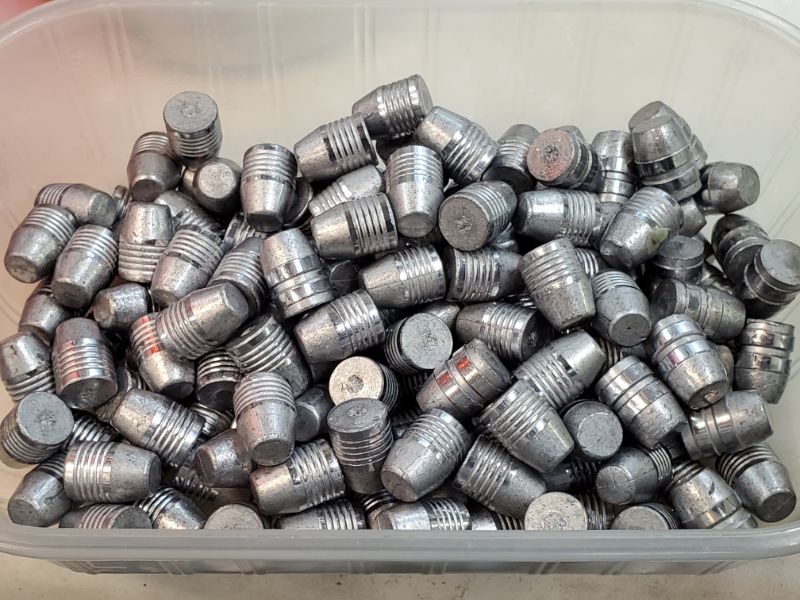 My shake and bake model with plastic BB's: 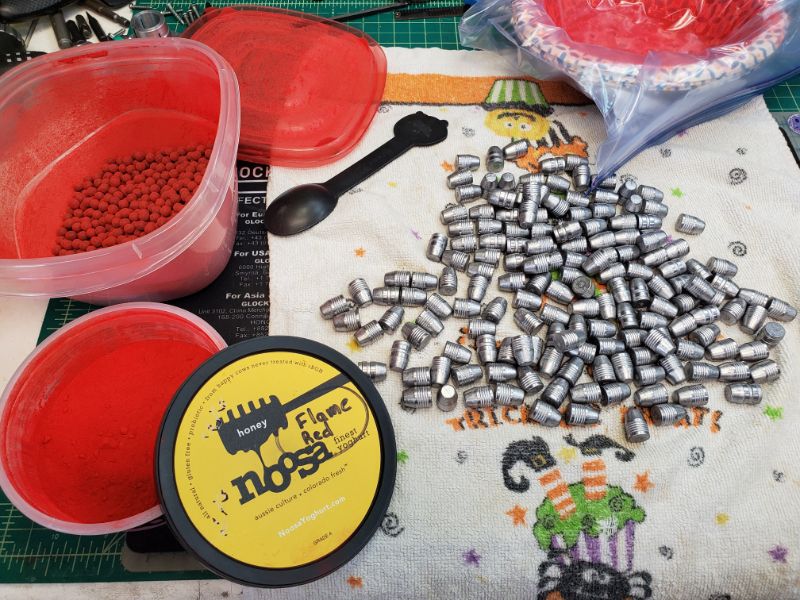 Ready for baking (15min at 400F - with the oven already at temp before I start): Coverage for pistol bullets is decent, although might want to try other colors: After sizing and putting GC on the WFN: Now, with the 30cal rifle boolits, coverage is not as good . Here is after visual sorting (good ones on the left): 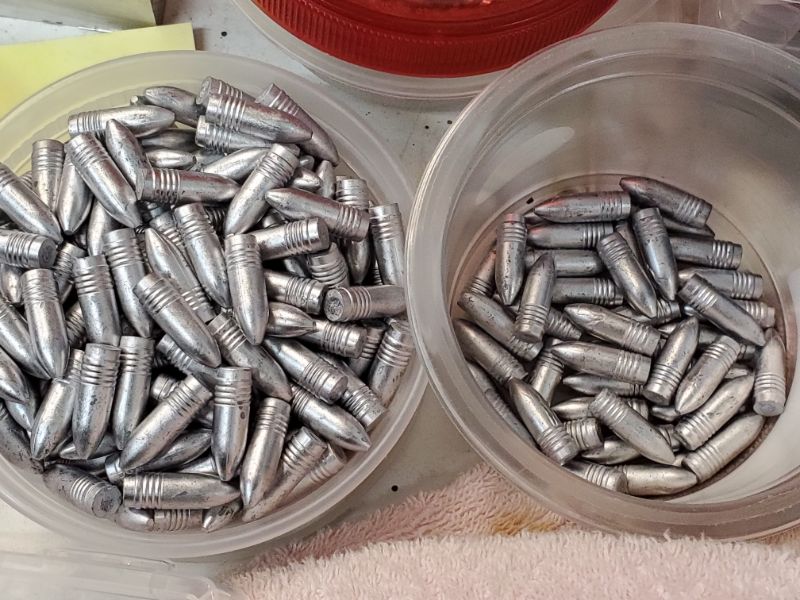 A tip I learned in the "other" forum is to use these waxed paper bowls with punched holes to get rid of the excess powder and of course the BB's as well: Here is the latest batch of 30 cal rifle bullets: 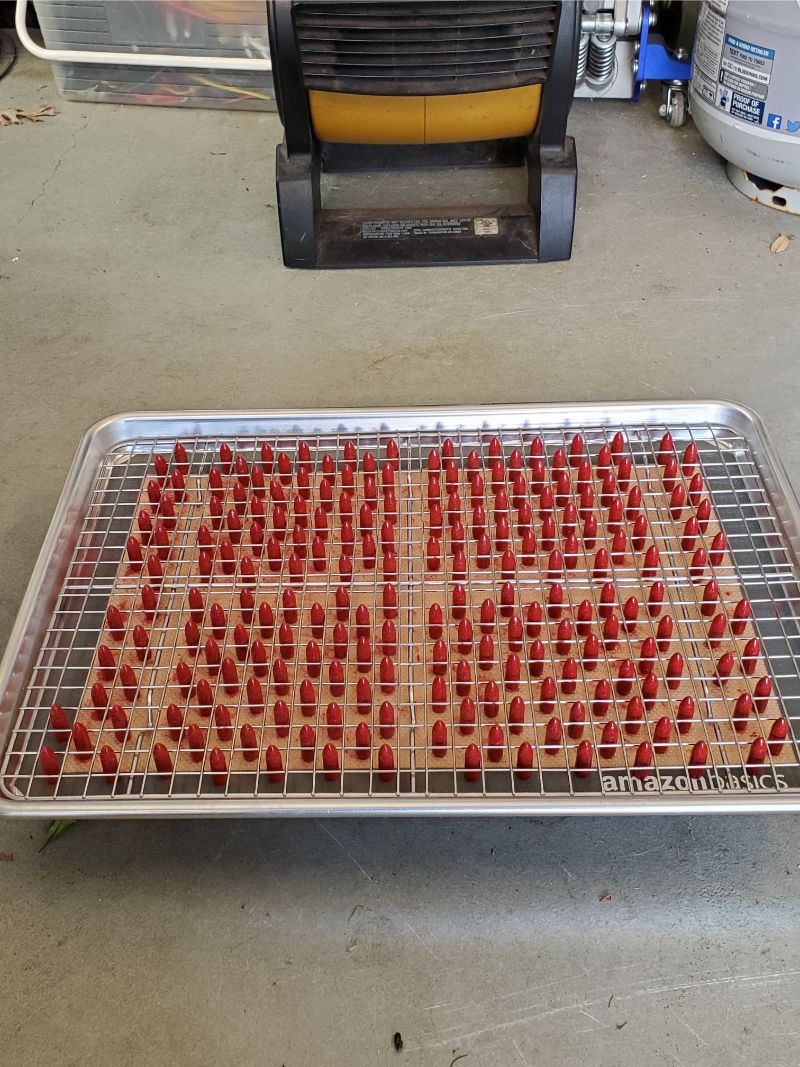 Coverage is "OK", but not as good/even as with the pistol bullets: Here are the pistol bullets after sizing for reference: 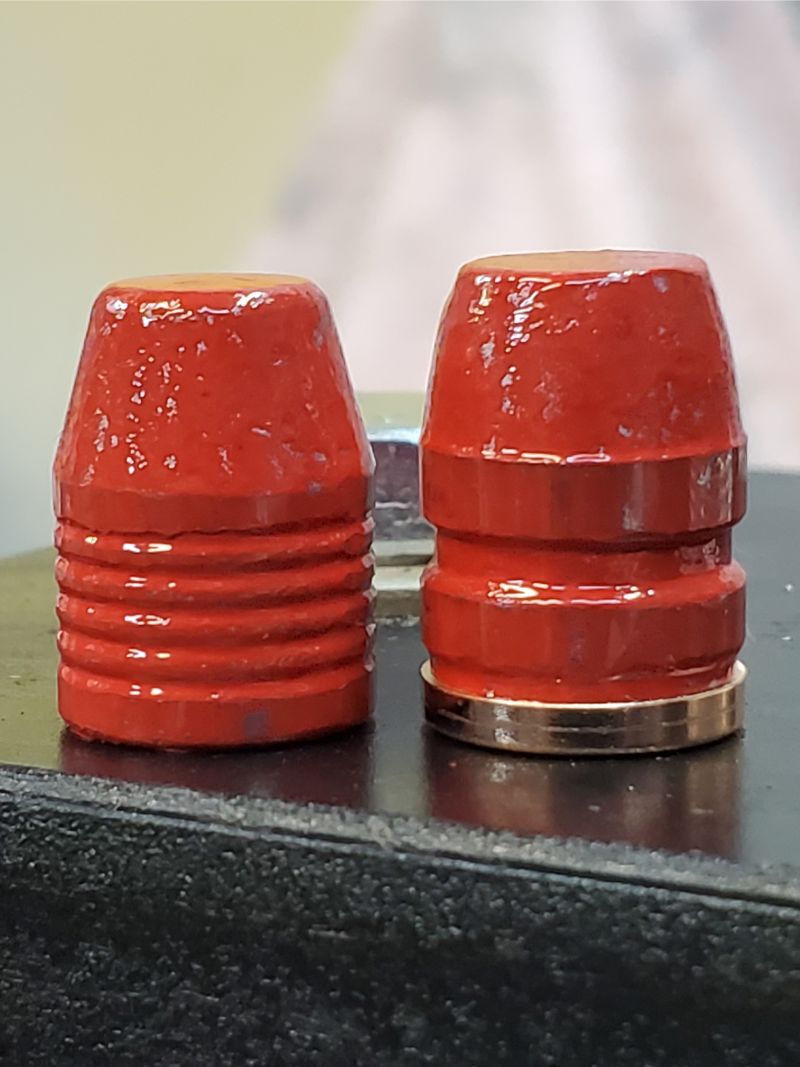 Not a thing wrong with either the pistol or rifle cast bullets IMO. Not if you're after sub MOA, might not happen. I'm partial to the gray silver of Smoke's.

I like Smoke's Clear It always has coated very well for me. He does claim however that his "Bacon Grease" (yuck yellow) coats the best of all that he sells

If you just pick the rifle bullets from the pellets with needlenose pliers and set them on their bases, you will retain much more powder and a more even coating. My results have been better shooting rifle bullets with a thick coat than a thin one. Also, seat your gas checks and then pre-size your castings nose-first (dry, or lube and wash) and THEN coat them. Might work better for you that way.

Ian,
So you do not tap off the excess powder before baking? If so interesting!

Thank you guys. After reading your comments I PM-ed smoke just now and he replied almost instantly. He recommended I try JD Green and Traffic Purple as the ones that currently tend to provide the thickest, one pass PC coating. I figure I can try both.

He also said that some of the coverage problems I might have is due to the powder absorbing humidity over time - the powder I am using is like 2-3 years old and not stored in decent containers, so "fresh" powder will help.

Ian - that is how I pick them, with needlenose pliers, so at least that part I was doing OK . I like your idea about sizing/gc install before coating as something to try, at least on the rifle boolits.

JW - I do not tap bullets to shake off excess before putting in the baking sheet. I am always concerned of getting too "thin" of a cover. 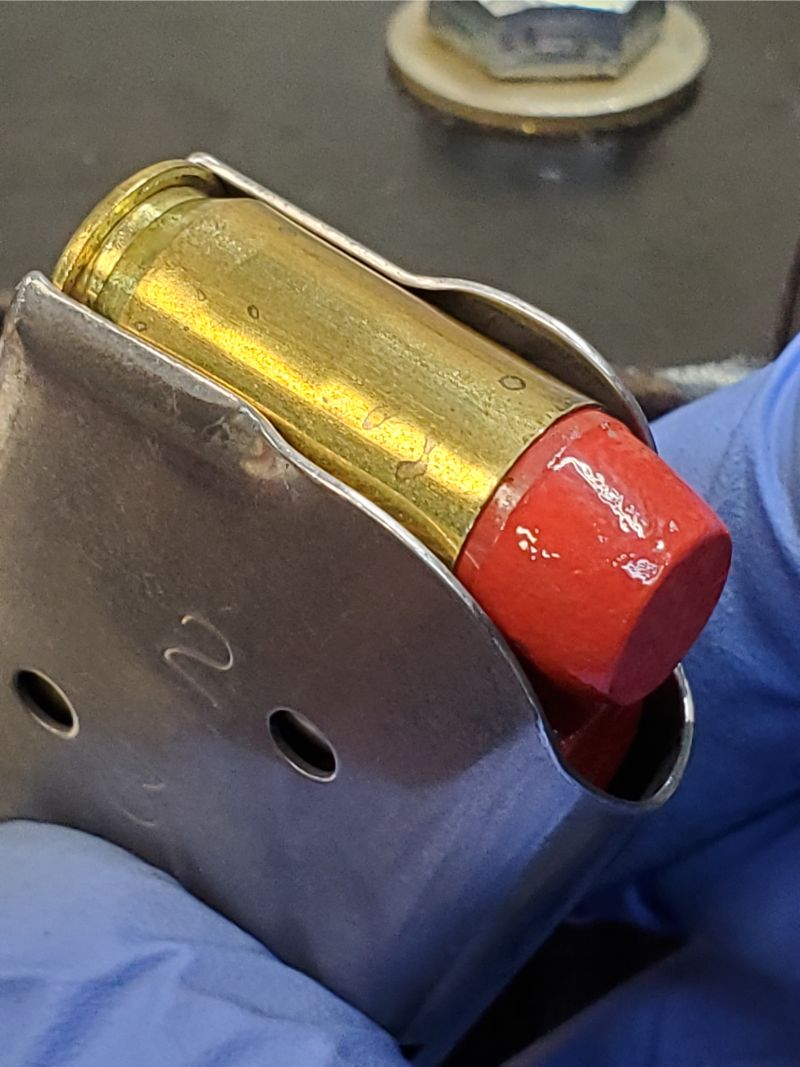 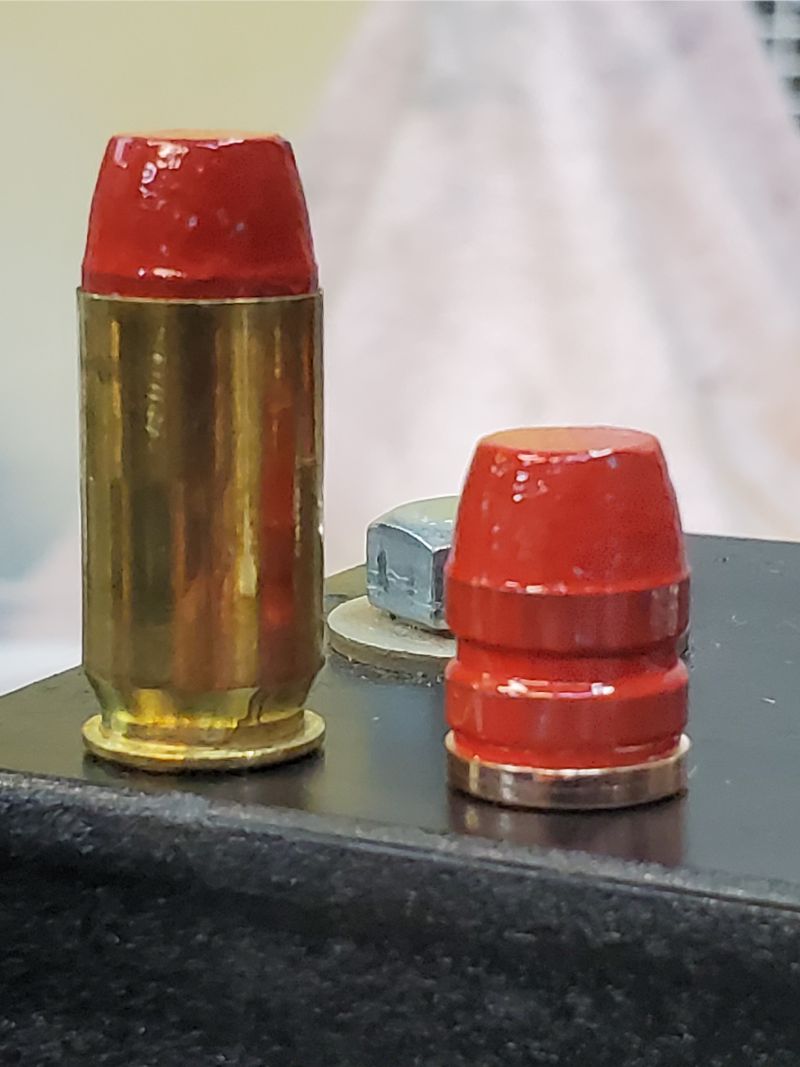 Jim, I DO tap them on the container rim to shake the excess clumps and fuzzy spots off, what I meant was not trying to strain the bbs and powder off first, look how much powder got lost on the rifle bullets in the paper strainer containser vs the photo before straining. I pick them out of the bbs, tap, and place on their bases.

If Full30 goes functional for indepenents I'm going to start uploading videos again and would make one on this if they do. Ultimately, we all do things a little differently and that's perfecly fine as long as the process meets our individual needs. The things I recommend work for ME, but are certainly not the only way to do this.

I don't tap my bullet either before placing them on the tray, I've pretty much figured out just how much powder for a given number of bullets so that I get nice coverage without it being excessive an looking clumpy, I can always add a little more powder if needed.

As far as powders I like I've tried quiet a few over the past couple years. Harbor Freight powders are off the list, the HF Red and Yellow were excellent when sprayed on but used too much powder and left rough edges on the bullets base that made seating gas check hard unless you deburred them using a NOE tool made for that purpose. Being the HF powders are Epoxy based it's a very hard coating.

I like Smokes powders some better than others, the Yellow/Green, Carolina Blue and Super Durable Clear are my favorites I get excellent coverage with those three powders. I like Eastwood powders as well Ford Light or Dark Blue, Lime or Medium Green, and one of my new favorite colors Metal Gray.

Always on the lookout for a decent rack to hold my cast upright when baking and I came across this find yesterday at Dollar Tree. Holes are large enough to easily stand any 30 cal possibly 40. Hope to try it after the monsoon today.

I am curious as to why the GC on the .45 bullets. What cartridge are they for.
I find no need for GCs in any pistol cartridges, but I suppose some guns and some
cartridges might need them.

Interesting info. So far, not going this route.

Pistolero said:
I am curious as to why the GC on the .45 bullets. What cartridge are they for.
I find no need for GCs in any pistol cartridges, but I suppose some guns and some
cartridges might need them.

Interesting info. So far, not going this route.

Personally I don't run gas checks on 45 ACP but I do run them on my NOE 358156 HP clone when using soft alloy for expansion that want hold up to magnum handgun velocity and pressure. Other than those I pretty much save my gas checks for rifles.

I have run down to 8 BHN bullets in .44 Mag full power and .45 Colt (".45 Magnum" Ruger-only loads) and .357
Mag full power loads without leading in multiple guns. I often wonder if I am just lucky and don't have
guns with bores which tend to lead or perhaps have not used a wide enough range of bullet designs, or maybe
am lucky in lube choices. I have read that this is the reason 'soft alloy and max loads', and I can see that
it makes perfect sense as a solution. I just haven't (fortunately) run into the problem. I have been expecting
it - but so far my lucky rabbits foot or something is working.

I've run .44 Magnum 16:1 alloy at 95% with no leading and rifle accuracy, and .38 Super also near the top end with acww alloy and very good accuracy, but the 45 Super auto shoots much smaller groups with gas-checked bullets.

Interesting point. I have tried both of Thompson's .44 GC designs without discovering any
magic hiding there. But a long learned lesson is 'every gun is a thing unto itself'.

And another one which many folks seriously overlook. Just because YOU can't do it, doesn't
mean NOBODY can do it.

Pistolero said:
Just because YOU can't do it, doesn't
mean NOBODY can do it.
Click to expand...

I believe that was one of Gear's Rules, or something very close. Brilliant.

After paying attention for a long time, sometimes you learn a thing or two.
I have watched people do some amazing things.

Gear’s rules:
#1 When pouring or transferring materials, the quantity spilled is directly proportional to either its value, hazard, or the degree of difficulty in cleaning it up.
#2 Improve our national marital statistics: Stay out of SWMBO’S kitchen with bullet stuff.
#3 Box o’ Truth rule: Shooting stuff is fun.
#4 Just because others couldn't do it doesn’t mean you will. Think about it.
#5 The mould will finally start dropping gems five minutes before suppertime.
#6 Don’t argue with stupid people. Have interesting discussions with intelligent people who happen to have a different point of view.
#7 Properly stored ammo doesn't spoil, eat, or increase your rent. So stock up.
#8 You can't shoot straight wheel weights; they have to be made into bullets first.
#9 Hodgdon will discontinue the only powder that ever shot straight in your favorite rifle.
#10 Wear PPE. Things go awry when least expected, and especially when you are particularly deficient in armor plate.
#11 Beware the loose nut behind someone else’s reloading press.
#12. If one accumulates more than 1,000 rifle or 2500 pistol cases of a caliber they do not load, it becomes immediately necessary to purchase a gun chambered in that caliber, along with dies, moulds, sizers, top punches, powder, primers, membership to a public shooting center with a long enough rifle range, ad nauseum.
#13 Your best groups will be made with no witnesses and and you won’t ever be able to duplicate them again with the same gun and load, even when alone.
#14 No matter what you think now, you will never have enough gun stuff. Only the President does, he’s got the four long arms of the military, plus about 2500 ICBMs with the trigger in a suitcase.